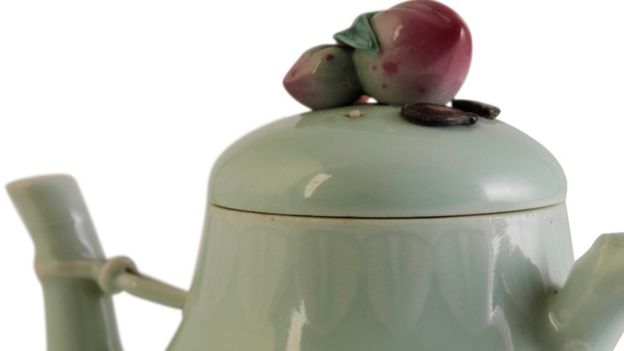 It seems like every couple of months a little piece of pottery smashes its estimate and sells for a colossal amount.

This week, a rare Chinese teapot sold at auction for just over £1m. The teapot was initially valued at just £1,000 to £2,000 by Dukes Auctioneers in Dorchester.

Now you may be thinking, what on earth makes a teapot worth £1m? The pear-shaped pot is only 5 inches tall but bears the mark of the Qianlong Emperor who ruled China in the 1700s.

You may remember the Qianlong vase that shattered auction records when it sold for €16.2m in France. Discovered in an attic, it became the most expensive piece of Chinese porcelain sold at auction in France.

Qianlong Emperor was a major patron and important preserver and restorer of Confucian culture. He was renowned for his love of the arts and insatiable appetite for collecting.

The green glaze celadon teapot sold on Monday in just 10 minutes as the packed auction room watched on. It had sparked an international bidding war before a telephone bidder paid a whopping £1,040,000 including auction fees. The saleroom cheered as the hammer finally slammed down.

The piece is decorated with a peach, a symbol of immortality and unity in Imperial China. The teapot still managed to fetch the staggering amount despite damage to its lid. It's exceptional rarity took precedent over the minor damage.

Discovered on a routine valuation in Dorset, the treasure had been hiding in plain sight. Used as a shelf ornament in the living room of the vendor's home.

Pieces bearing the seal of the Qianlong Emperor have been breaking records in recent years as the newly-rich Chinese are beginning to buy back their lost heritage.

What antiques will you discover in auction? Explore our online auctions today and unearth your own treasure.