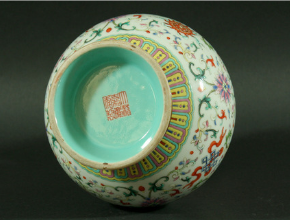 Chinese vases seem to be hot property at the minute with another one making headlines after selling for £252,000 at auction.

This rare altar vase sold for a massive 150 times pre-auction estimates after it was revealed that it was specially commissioned by the Qing court for ceremonial use in palaces and temples.

It has been in the UK since the 1930s after it was brought to the country by a solicitor who worked in Shanghai in the early 20th century before passing down through descendants and spending the last 30 years on the vendor’s mantelpiece in Wiltshire.

The vase is finely decorated in famille rose enamels and adorned with patterns and imagery to include the Bajixiang, the Eight Buddhist Emblems, divided by lotus heads and scrolls.

Vessels of this type were used throughout the reign of the Qianlong emperor (Qianlong seal sells for €21m)  but this example, which carries an iron red six character seal on the base, represents his successor Jaiqing, the fifth Qing emperor.

The very well-preserved vase dates back to somewhere in the region of Jaiqings reign between 1796-1820, leading to a bidding war which saw the vase quickly make it into six figures.

This intense bidding combined with the revelation of its age and history created an electric auction.

The vase dramatically overshot its pre-sale guide before bidding came down to a contest between a renowned Hong Kong dealership and a prestigious London dealer.

The former would eventually win the lot when the hammer was brought down at £252,000.

This desirability is one of the core pillars of the CARD system used to identify value within antiques. Check out our guide: Buying Antiques in Auction guide.