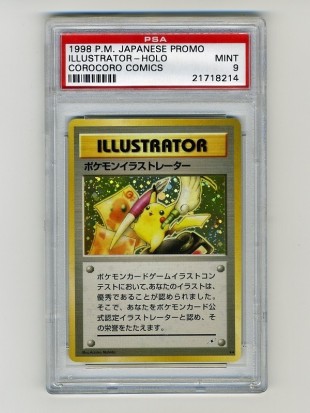 Worlds most expensive Pokemon card sells for over £40,000

The Most Expensive Pokemon in the Card

Pokemon has once again become a worldwide success following the release of it’s Pokemon Go app which attracted more than 20 million active users and this new burst of popularity has led to increasing values of collectable Pokemon cards.

The augmented-reality game has users walk around the real world to catch virtual Pokemon in their neighbourhoods and players in the US took over 100 billion steps in three months.

A card aptly dubbed “the world’s most valuable card” has become just that, selling for almost £45,000 at an auction in Beverly Hills earlier this week. The card was awarded to winners of CoroCoro Comic Illustration Contest in January 1998 and with only 20 to 39 copies of it ever made, its rarity has seen it become one of the most sought-after cards.

According to the community ran Pokemon encyclopedia, Bulbapedia, the card text says: “We certify that your illustration is an excellent entry in the Pokémon Card Game Illust Contest. Therefore, we state that you are an Officially Authorized Pokémon Card Illustrator and admire your skill.”

The card, which depicts fan-favourite Pikachu, is considered the most valuable and iconic Pokemon card among collectors and was designed by Atsuko Nishida, one of the chief graphic illustrators of the series.

The Pikachu Illustrator card was only available to competition winners and the first example made available for sale sold for around £18,000 in the early 2000s.

This card was put up for auction by a private collector in his 20s who cashed in on the recent wave of popularity to sell his copy to an unidentified collector based in Hong Kong.

The Pokemon phenomenon first emerged in Japan in 1996 before becoming a global sensation spanning trading cards, collectable toys, multiple television series and a video game franchise which has sold over 279 million copies.